Greenville County, South Carolina – Greenville County Sheriff’s Office is requesting anyone with information about an attack on a homeowner to come forward so the assailant can be identified.

According to law enforcement officials, deputies were dispatched to a home in Taylors to a report of a woman who was attacked in her home on Thursday at around 10 a.m.

The woman told deputies she was approached by a man who asked if she had jumper cables. When she told him she did not, he moved on down the street and approached a few more homes in the area before returning.

When he arrived back at the victim’s home, he forced his way inside and grabbed her around the neck and threw her to the ground. 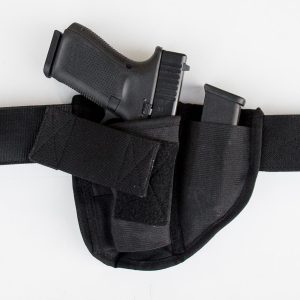 The woman pulled a gun on him, causing the home invader to flee the scene. The mans face was caught on a neighbors Ring Doorbell camera after he approached that home, but police have not yet been able to track him down.

GCSO investigators are encouraging anyone with information about the whereabouts of the suspect to call 864-467-5283 or Crime Stoppers at 23-CRIME (232-7463).

If the victim had not been able to get to her gun, this situation might have turned out very differently. Carrying your CCW pistol at home can be a bit cumbersome and uncomfortable if not done properly.

I have found the most comfortable way to carry at home is to use the Brave Response Appendix Holster since it allows you to carry your firearm with any clothes. From basketball shorts to sweats and yoga pants, this holster will fit every situation since it does not rely on pants and a belt to keep the holster on you.

Home invasions often begin at the front door of your home and knowing how to defend from an ambush at those locations is essential for good home defense. Read here for the training video series, Door Ambush for the latest tactics and techniques.